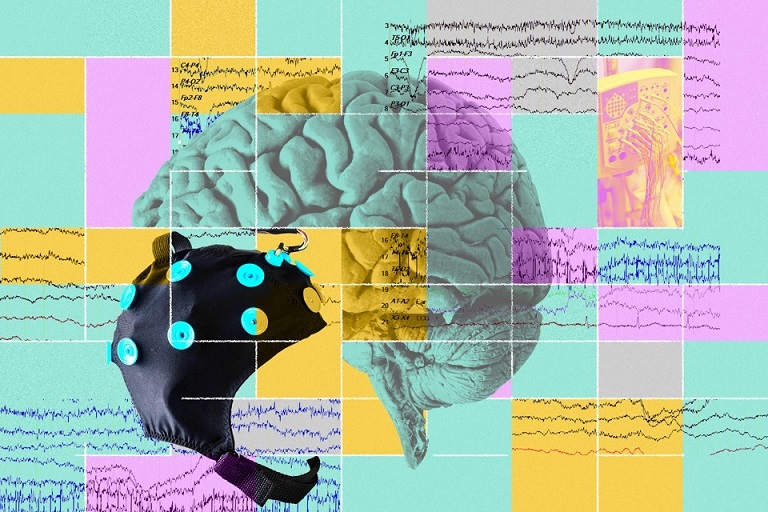 Technology that compares your brain’s electrical activity to everyone else’s could revolutionize mental-health treatments—or worsen people’s obsessions with perfection.

The woman who would be mapping my brain, Cynthia Kerson, had tanned, toned arms and long silvery hair worn loose. Her home office featured an elegant calligraphy sign reading “BREATHE,” and also a mug that said “I HAVE THE PATIENCE OF A SAINT.”

Kerson is a neurotherapist, which means she practices a form of alternative therapy that involves stimulating brain waves until they reach a specific frequency. Neurotherapy has a questionable reputation, which its practitioners sometimes try to counter by putting as many acronyms next to their names as possible. Kerson comes with a Ph.D., QEEGD, BCN, and BCB. She’s also past president of the Biofeedback Society of California and teaches at Saybrook University. Even so, somehow it was the tension between those two pieces of office ephemera that made me instinctively want to trust her.

Kerson used to have a clinic in Marin County, where she primarily saw children with ADHD, using neurotherapy techniques to help them learn to focus. But she also worked with elite athletes who wanted to improve their performance, as well as people suffering from chronic pain and anxiety and schizophrenia and a host of other disorders. These days, she’s so busy teaching and consulting that she no longer runs her individual practice, but she agreed to bring out her brain-mapping equipment for me: snug-fitting cloth caps in various sizes; a tube of Electrogel, a conductive goo; a black box made by BrainMaster Technologies that would receive my brain’s signals and spit them out into her computer.

I’m the kind of person who procrastinates with personality tests; I’m susceptible to the way they target that place where self-loathing and narcissism overlap. I suppose it stems from the feeling that there is something uniquely and specially wrong with me, and wanting to know all about it.

So I’ll admit that I was thinking of this brain map in overly fanciful terms: It would be like a personality test but scientific. I kept thinking about this line I’d read in a book by Paul Swingle, a Canadian psychoneurophysiologist who uses brain maps to identify neurological abnormalities: “The brain tells us everything.”

Kerson placed the cap on my head and clipped two sensors on to my earlobes, areas of no electrical activity, to act as baselines. As she began Electrogelling the 19 spots on my head that aligned with the cap’s electrodes, I was nervous in two different directions: one, that my brain would be revealed as suboptimal, underfunctioning, deficient. The other, that it would be fine, average, unremarkable.

EEG tests, which measure electrical signals in the brain, have been used for decades by physicians to look for anomalies in brain-wave patterns that might indicate stroke or traumatic brain injury. The kind of brain map I was getting used a neuroimaging technique formally known as quantitative electroencephalogram, or qEEG. It follows the same general principle as EEG tests, but adds a quantitative element: Kerson would compare my brain waves against a database of conventionally functioning, or “neurotypical,” brains. Theoretically, this allows clinicians to pick up on more subtle deviations—brain-wave forms that are associated with cognitive inflexibility, say, or impulsivity.

In neurotherapy, qEEGs are generally a precursor to treatments like neurofeedback or deep brain stimulation, which are used to alter brain waves, or to train people to change their own. Neurotherapy claims it can tackle persistent depression or PTSD or anger issues without resorting to talk therapy or pharmaceutical interventions, by addressing the very neural oscillations that underlie these problems. If you see your brain function in real time, the idea goes, you can trace mental-health issues to their physiological roots—and make direct interventions.

But critics argue that neurotherapy’s treatments—which might take dozens of sessions, each costing hundreds of dollars—have very little research backing them up. And although the mainstream medical community is starting to pay closer attention to the field, particularly in Europe, in the U.S. neurotherapy is still largely unregulated, with practitioners of varying levels of expertise offering treatments in outpatient clinics. At the most basic level, not everyone who’s invested in the technology that allows them to do qEEG testing is able to correctly interpret the resulting brain map. Certification to administer a qEEG test—a process overseen by the International qEEG Certification Board—requires only 24 hours of training, five supervised evaluations, and an exam, with no prior medical experience.

As Jay Gunkelman, an EEG expert and past president of the International Society for Neurofeedback and Research, puts it: “It’s a Wild West, buyer-beware situation out there.”

All this is to say that while skilled interpreters can pick up all sorts of information from an EEG, these tests are also “ripe for overstatement,” according to Michelle Harris-Love, a neuroscientist at Georgetown’s Center for Brain Plasticity and Recovery. That’s worrisome since, in recent years, EEG technology has gotten cheaper and more widely available. A qEEG brain map can cost as little as a few hundred dollars, which means more people are taking a peek at their brain waves, not just for diagnostic purposes, but also with optimization in mind.

“People will come in for optimal training,” Kerson told me as she adjusted the sensors in my cap. “But what often happens is we’ll find something a little pathological. Which I guess depends on your definition of pathological.”

NeuroAgility, an “attention and performance psychology” clinic in Boulder, Colorado, for instance, brainmaps CEOs and then uses neurotherapy to help them “come from a place of action, rather than reaction.” Other clinics promise to use the technology to help athletes and actors get in the zone, as Kerson did in her private practice. “There are business executives who want to reduce their obsessive-compulsive traits, or athletes who want to tune up their engines,” Gunkelman told me. “At Daytona, they’re all fabulous cars, but every single one of them gets a tune up three times a day. No matter who you are, if you look at brain activity, there are things we can do to get you to function better.”

For the first five minutes my brain was being mapped, I sat with my eyes closed. My mind felt unquiet; I was thinking about what it felt like to have a brain, trying to describe to myself the feeling of having thoughts. “Your eyes are moving around a lot underneath your lids,” Kerson said. She suggested I put my fingertips on my eyelids to keep my eyes from shifting. I sat like the see-no-evil monkey for the rest of the test, trying to remain thoughtless and keep my jumpy eyes still.

When the first half of the test was done, I spied my brain waves on Kerson’s computer screen: 19 thin, wobbly gray lines stretching across a white background. My brain activity looked like an Agnes Martin painting. Kerson had me turn the chair around for the second, eyes-open half, in case watching the real-time brain waves made me self-conscious. Her software program chimed out a warning every time I blinked, which turned out to be a lot. “I’m going to turn off the sound so you don’t get frustrated,” Kerson said.

When we were done, she scrolled through the 10 minutes of brain waves. Two of the lines looked alarming—every few seconds they jolted all over the place, like some sort of seismic indication of an internal earthquake. Kerson told me not to worry; the EEG also picks up on muscle movements, and those were my blinks.

“So there’s one thing I see right off the bat,” she said. “We’d expect to see more alpha when you close your eyes. But it actually looks pretty similar whether your eyes are open or closed. That tells me that you might not sleep well, you might have some anxiety, you might be overly sensitive—your brain talks to itself a lot. You can’t quiet yourself.” This was all accurate, if not news to me.

Kerson continued to scan through the test, selecting sections that weren’t compromised by my blinks, trying to gather enough clean data to match against the database. She ran the four good minutes through the program, which spat out an analysis of my brain waves that looked something like a heat map, with areas of relative over- and under-functioning indicated by patches of color. By most measures, my brain appeared a moderate, statistically insignificant green. “You’re neurotypical,” she said, sounding minorly disappointed.

Kerson nonetheless recommended vitamins to beef up my neural connections, since my amplitudes were a little lackluster. “Meditating would be good for you, but you’re going to need something else for meditation to work,” she told me, noting that I should consider some alpha training, which would involve putting on headphones to listen to sounds that would get my brain waves into the right frequency. I should also probably change out my contacts if I was blinking that much.

A qEEG may not be anything like a personality test, but it still left me with the same unsatisfied feeling of being parsed and analyzed but still fundamentally unknown. My mind had been mapped, I had seen the shape of my brain waves, but I didn’t have any new or better understanding of my galloping, anxious brain, or what happens on those afternoons where I lose hours to online personality tests. Instead, I was just left with the vague sense that in some deep and essential way, I wasn’t performing as well as I could be.

I decided to seek out a second opinion from Gunkelman, whom several people had described to me as the go-to guy for interpreting EEGs. Gunkelman worked as an EEG tech in a hospital for decades, he told me. “In the early 1990s, I figured out that I had read 500,000 EEGs,” he said. “And then I stopped counting.” When he looked over my results, he grumbled about not having enough data to work with; for a proper brain map, he needed at least 10 minutes each with eyes open and closed, he said. But he nonetheless zipped through the EEG readout with the confidence of someone who’s done this more than half a million times before.