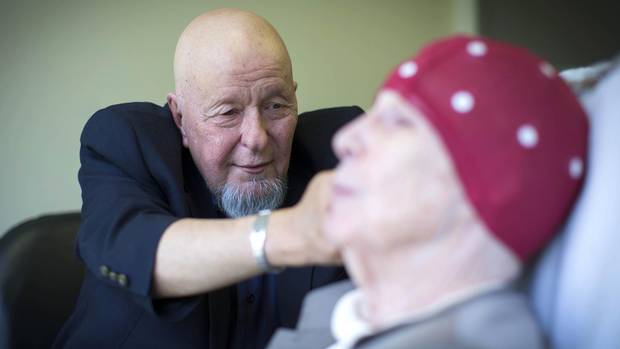 There was a time when his eyes and brain were at odds with one another. He would try reading a book and found he couldn’t follow the words beyond four pages or even remember what he had just read. He was perpetually tired. He needed help.

So Dennis Polonich, the former Detroit Red Wings forward who decades earlier was left broken and bloodied on the ice after being smashed in the face with an opponent’s stick, ended up walking into Stuart Donaldson’s Myosymmetries Clinic in Calgary – for biofeedback and psychological services.

Mr. Polonich may not have understood all the science and technology behind his treatment, but this much he knows for certain: “I walked out of that office feeling more comfortable than I was going in. I feel better. I feel happy. I’m reading again.”

Biofeedback is not a new form of alternative therapy – the Biofeedback Research Society was formed in 1969 in Santa Monica, Calif. – but it is controversial. Dr. Donaldson’s use of detailed data collected by a quantitative electroencephalograph (qEEG), however, is at the leading edge of assessing and treating brain-injury symptoms. Using sensors in contact with a patient’s scalp, qEEG technology maps out the brain, producing charts and numbers that indicate which parts are overactive and underactive and whether there have been previous concussions or a mild traumatic brain injury (MTBI).

It is the study and management of concussion symptoms that has drawn Dr. Donaldson to a sport that is now drawn to him. From former NHL players Mr. Polonich, Dana Murzyn, Colin Patterson, Theo Fleury and others, to the teenaged members of the Alberta Junior A Okotoks Oilers, the concerns are the same: those who suffer from a concussion or MTBI want to know when they can return to action, while those who have suffered multiple blows to the head want to know if they’ll be okay later in life.

For answers, they seek out Dr. Donaldson.

“I’m a data nut,” says Dr. Donaldson, whose PhD is in clinical psychology and whose early research examined the effectiveness of EMG biofeedback (electromyography, the electrical activity of muscles) for the relief of chronic back pain. For Dr. Donaldson, it became a matter of personal interest after he slipped on ice one New Year’s Eve and fractured his right hip. It was an injury that has hobbled him ever since.

“I’ve been involved with biofeedback since 1985; did my doctoral studies on motor control and muscle activity at the University of Calgary,” he says. “We took my experiment to treat and cure lower-back pain, which I was quite successful in doing. In my five-year followup on my doctoral studies’ patients, 11 of the 12 were symptom free and the 12th one I couldn’t find.”

With concussions garnering attention throughout the sporting world, Dr. Donaldson began to work with former NHLers who had heard of his practice by word of mouth. At a Calgary Flames alumni meeting last October, Mr. Polonich and Mr. Patterson spoke of Dr. Donaldson’s biofeedback successes in ridding their pain. Mr. Fleury took the advice in the hopes of curing his symptoms.

“I was suffering with depression, anxiety, my sleeping patterns were bad. We figured I had 10 to 12 concussions throughout my life,” Mr. Fleury says, noting he was never the same player after his worst concussion during the 1998-99 NHL season. “Part of what I’ve learned is that you have to believe [biofeedback] works. You have to come with an open mind and open attitude.”

Patients who come for treatment sit in a comfortable chair and have a skull cap with 19 electrodes placed on their head. For 10 minutes with their eyes open then another 10 with them closed, an electrical current said to be 400 to 800 times weaker than what we’re exposed to by our cellphone is dispatched into the brain. Dr. Donaldson says an apt description of what happens came from one of the Okotoks hockey players who figured, “You’re going to defragment us.”

Not everyone shares an open attitude toward biofeedback. There have been complaints of qEEG-produced “false positive errors” and that not enough medical professional organizations recommend the use of qEEG as a screening test for neurological and psychiatric conditions. That isn’t true for the American Academy of Pediatrics, which ranks biofeedback as Level One, Best Support, for treating children with ADHD.

The cost of those treatments has also come under attack. Myosymmetries charges $700 for an assessment and $2,000 to $3,000 for a completed course of treatment. The sessions are not covered by Alberta Health Care, although some privately funded extended health-care plans will cover the cost if a psychologist performs the procedure or is present when the treatments are done.

A past president of the Association for Applied Psychophysiology and Biofeedback, Dr. Donaldson acknowledges there is valid criticism when it comes to some biofeedback practitioners “making exorbitant claims and having no training or minimal training.”

Over all, though, he says the science and credibility of qEEG biofeedback has been supported and used as a dependent variable in more than 130,000 research papers. As well, U.S. courts now accept biofeedback as an objective measure of brain injuries.

The Okotoks Oilers insist it has benefited them. Before the start of the 2016-17 season, 23 players were tested then retested if they suffered another hit to the head or complained of headaches. Sometimes, the results were unexpected.

Mr. Polonich endured one of the NHL’s most egregious on-ice attacks when he has struck in the face by a stick-wielding Wilf Paiement of the Colorado Rockies in 1978. Mr. Paiement was suspended for 15 games and lost an $850,000 (U.S.) lawsuit filed against him by Mr. Polonich. To this day, Mr. Polonich has difficulty breathing because of a fractured nose that required reconstructive surgery.

“The one side of my nose doesn’t work and I was having trouble focusing,” Mr. Polonich explains. “I went to see [Dr. Donaldson] and I feel better now. I’ve just read Wayne Gretzky’s and Gordie Howe’s autobiographies and I’m halfway through Mike Tyson’s. I love to read again.”