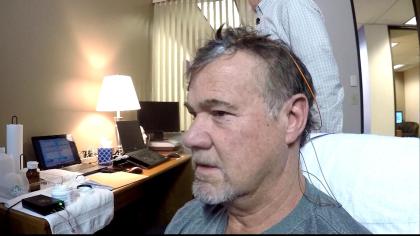 DENVER (CBS4)– About a dozen former Denver Broncos, some from the Orange Crush era, are taking part in a research study they say is helping them recover from post-concussion symptoms and traumatic brain injuries. They believe those injuries were suffered during their playing days.

After going through the protocol, “It was kind of like night and day,” said former Denver Broncos offensive lineman Dave Studdard, “The light came back on, clarity just everywhere.”

CBS4 was on hand as Studdard went through one of his final sessions at New Hope For the Brain, a Lakewood based performance and rehabilitation center. Studdard said he believes he suffered from as many as 200 concussions during his days protecting Bronco quarterbacks like John Elway and Craig Morton.

He said concussion protocol in his playing days consisted of “Take a play off then come back in.” A few years ago, Studdard said he noticed he “couldn’t get anything clear in my mind… a constant fog. I felt like I was in a big fog and didn’t know how to get out.”

In 2015, Studdard heard about the New Hope For The Brain program from another former NFL player and decided to give it a try.

After about the third or fourth session Studdard says,”It just opened up on me. I feel like I’m 35 years old again. They’ve given me back my life that the NFL took away from me.”

Studdard is not alone. Jon Keyworth, a former Broncos running back from 1974- 1980. Keyworth lives in Montrose and went through the program last summer after years of what he and his wife describe as severe depression, confusion and anger.

“I could not find or remember what I was doing,” Keyworth told CBS4. “I had thousands of five yard collisions.”

His wife, Claudia, said her husband’s depression and mood swings were “Terrifying for me. I can see why these men put a gun to their chest,”

“He didn’t know what was wrong with him,” said Claudia Keyworth, but suspected a career of untreated concussions had left her husband with brain injuries.

“I got up out of the seat- I had not felt that clarity for four years,” said Keyworth.

His wife says he is “Eighty or 90 percent better than he was.”

“We know there are things that can be done for them,” Montgomery told CBS4. “The brain heals itself; we have to provide the environment for it.”

Montgomery said the techniques being employed at her clinic essentially help the brain reorganize and rebalance itself. She said her clinic has worked with about a dozen former Bronco players since last July and many show brain improvement and improvement in brain function .

She said players wives are among the first to notice the differences, “Some of them say it’s like getting their husband back. They’re saying their husbands are functioning better and are more energetic.”

Montgomery said follow up testing has shown the brain improvements for former Broncos and other NFL players are holding up.

“We made a promise to the players we would help them and we are sticking with our promise,” said Montgomery. “I think it’s a moral obligation.”

Montgomery said follow up testing six months after the conclusion of the treatment sessions, has shown improvements holding.

CBS4 Investigator Brian Maass has been with the station more than 30 years uncovering waste, fraud and corruption. Follow him on Twitter @Briancbs4.