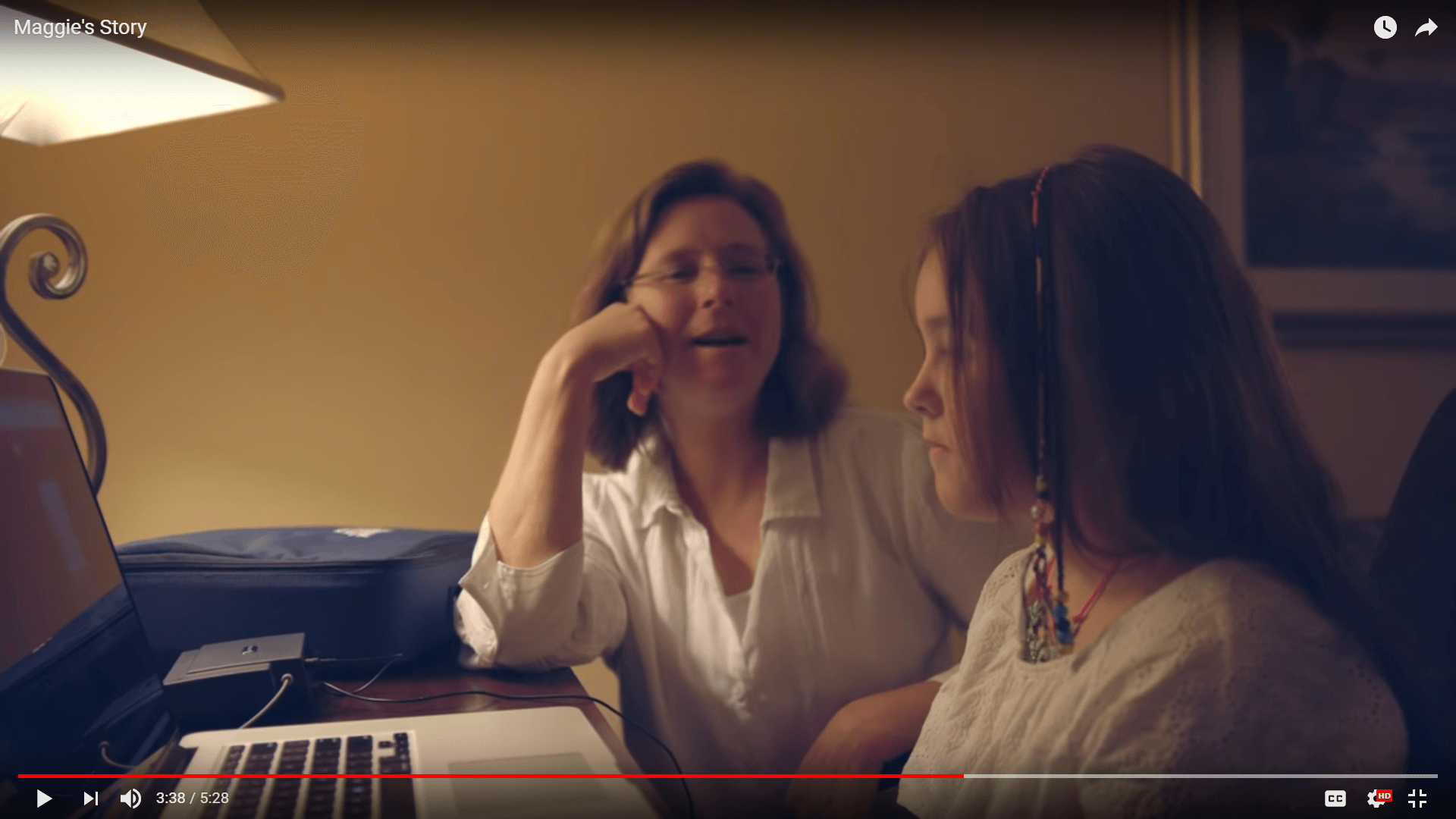 Maggie’s story begins with a simple greeting – a polite exchange among acquaintances. But for two parents dropping their children off at school, the dialogue that followed would reveal sadness, fear, desperation and ultimately hope.

One morning Brian Milstead asked fellow parent Kim how she was doing. Kim, exhausted by another sleepless night, told Brian about her daughter’s epileptic seizures and her worsening condition. As the owner of a business specializing in bio/neurofeedback equipment, Brian was familiar with research supporting the use of neurofeedback with this population group. He suggested that Kim get a copy of her daughter’s EEG so he could share it with a couple of colleagues to see if Maggie was a good candidate for neurofeedback training. As Kim listened to what he had to say, she never imagined that their conversation would set in motion a series of events that would one day change the life of her little girl.

When she was only 11 months old, Maggie underwent her first brain surgery for Hydrocephalus, acondition in which there is an accumulation of cerebrospinal fluid (CSF) within the brain. At age 2, she was diagnosed with epilepsy. Her specific type of epilepsy, is called ESES (electrographic status epilepticus during sleep). It is characterized by increased background activity that does not allow the brain to carry out its normal functions during sleep such as memory consolidation and language development, such that it can cause these functions performance to decline. Those suffering from ESES can experience multiple types of seizures including tonic-clonic (grand mal) seizures, which Maggie experienced regularly as well.  “She had ESES during about 90% of her sleep. Some of her seizures lasted five minutes and caused her to stop breathing along with causing paralysis,” said Kim.

Her condition was considered “intractable”, meaning that for years doctors were unable to control the seizures with multiple anticonvulsant medications. While the drugs helped slow down the frequency of Maggie’s seizures, they did not eliminate them and she began to experience progressive cognitive decline. “The medications were so hard on her with all of the side effects. It was pure torture on our entire family to see Maggie decline so rapidly,” remarked Kim. One of the lowest points came when the family was told of the risk of SUDEP (sudden unexpected death in epilepsy). It was around this time that Brian spoke to Kim about neurofeedback and she recalls her reaction, “I will be completely honest, when he was explaining it, it sounded crazy on so many levels. How could it be possible that we have seen top doctors and they cannot get her seizures under control and this treatment option could?”

True to his word, after Brian had received a copy of the EEG, he contacted his friend and colleague Jay Gunkelman, Chief Science Officer at Brain Science International. Upon review of the test results, Jay’s first step was to contact Maggie’s doctor, stressing that, “We work ONLY with the consent of a supervising specialist who is treating the client for the epilepsy.” Maggie’s doctor had heard of neurofeedback, but had not seen enough evidence of its use in ESES or epilepsy to consider it.

According to Jay, “Maggie’s doctor could only be considered an open-minded skeptic when we started, telling the family to ‘do this at their own risk’… but also not opposing it after we discussed the neurofeedback training we proposed, and after sharing the sparse literature we have, including the meta-analysis by Gabriel Tan showing positive outcomes in intractable epilepsy, as well as Barry Sterman’s paper from 2000 reviewing his work.”

Maggie’s parents, Andy and Kim, had a very difficult decision to make – one they did not take lightly. They carefully considered their options and the advice they received from family and friends, but in the end, it was up to them to decide. Andy recalls saying, “If it doesn’t hurt, let’s just give it a shot.” After all, they weren’t abandoning her current treatment…just adding something new…something that might just help Maggie. At the very least, it was something that gave them hope.

After receiving the go-ahead from the family, Jay designed the neurofeedback training approach based on Maggie’s EEG, which was shared with Linda Walker, MHR, LPC, BCN, BCB – a licensed clinician experienced in neurofeedback as well as other modalities. Linda then created a personalized brain optimization training plan.

The training began over a January weekend, with a QEEG assessment done by Linda, followed by several training sessions with Maggie. “I tailored the training screens so that Maggie would receive feedback that was appealing to her. Behaviorally, her brain needed to receive a message about when it was having the correct activity and when it was not — do this, don’t do that. We also understand that the best learning takes place in circumstances in which what we’re learning is appealing and has some element of emotional buy-in. Also, learning needs to be discreet; the message about what the brain is doing or not doing needs to be clear. Feedback rewards need to occur consistently enough so that the brain can learn a new pattern of functioning.” explained Linda.

In addition, Linda undertook the critical step of teaching Kim how to use the neurofeedback equipment, attach the EEG sensors and run the sessions herself. Due to the high number of sessions anticipated, the training would eventually be done remotely, initially via webcam, and always actively managed from a distance by Linda.

Jay noted, “It is important not to mistake perfectly good gaming devices for actual customizable clinical tools. Amplifiers and filters need to be customized to match the EEG, not standardized.  The device needs to be able to be actively managed from a distance, not merely posting data to a cloud.”

About three to four weeks into the training, Maggie slept through the night for the first time in over two years. For the family, this was a sign that they made the right decision. After approximately 70 sessions, administered three times a week over a 5-month period, Maggie’s was seizure free and her EEG was completely clean.

Throughout her training, Maggie continued to receive care from her epileptologist, who guided the eventual reduction/withdrawal from medication as the EEGs cleared of abnormal activity.

As of this post, Maggie has been seizure free for three years.

Jay Gunkelman, QEEG Diplomate, is recognized as one of the top leaders in the field of EEG and QEEG, and has processed over 500,000 EEGs since 1972. He has served as president of The International Society for Neurofeedback and Research, as well as a board member and treasurer of the Association for Applied Psychophysiology and Biofeedback and is a past-president of the Biofeedback Society of California. Jay was the first EEG technologist to be certified in QEEG (1996) and was granted Diplomate status in 2002. He has conducted, published or participated in hundreds of research papers, articles, books and meetings internationally. He continues to lecture on EEG/QEEG at neuroscience meetings worldwide. He has co-authored the textbook on EEG artifacting (2001). Jay remains busy with current projects and publications related to his seminal paper on EEG endophenotypes (2005, Clinical Electroencephalography). He is co-founder and Chief Science Officer of Brain Science International and is a popular lecturer worldwide on the topic of QEEG and phenotype identification of neurological disorders.

Linda Walker is a licensed professional counselor and school counselor who holds a master’s degree in Human Relations and Counseling from the University of Oklahoma and post graduate certificates in substance abuse and school counseling from Western Michigan University.
In her private practice working with a general population, Linda integrates a variety of methods with an extensive focus on biofeedback, neurofeedback and QEEG. In addition, she teaches biofeedback and neurofeedback at Western Michigan University and served as past president of the Midwest Society of Behavioral Medicine and Biofeedback.

Brian Milstead is the President of the Midwest Society of Behavioral Medicine and Biofeedback, and the sales manager Bio-Medical Instruments, Inc.

4 thoughts on “Maggie’s Story – How Neurofeedback Changed Her Life”