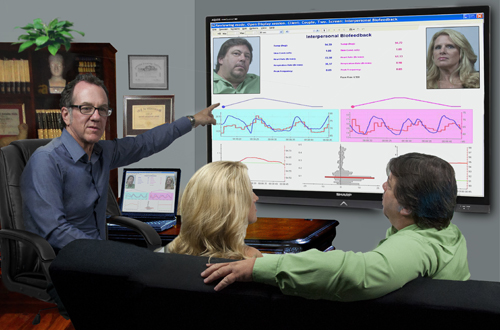 Over the past 30 years, marriage and family therapist Steve Kassel has actively dedicated his life’s work to biofeedback therapies. This method of therapy teaches individuals to enhance their health by learning to regulate physiology, such as heart rate, brain waves, muscle tension, skin temperature and blood pressure.

Kassel’s initial interest in people began when he attended the California Institute of the Arts, where he earned a Bachelor of Fine Arts in film and video. Although this career choice seemed exciting at the time, Kassel soon discovered it would not provide a lot of financial stability.

Kassel then channeled his interest in people to the field of counseling, inspired by his sister, a biofeedback therapist.

By 1985, Kassel was board certified in biofeedback and then enrolled at Phillips Graduate Institute in Chatsworth to become a marriage and family therapist. Eager to help individuals overcome pain and stress-related medical disorders, he opened up the Valencia Pain and Stress Management Center with a local psychiatrist.
That same year, Kassel took a special interest in utilizing EEG for clients with Attention Deficit Disorder. In this therapy, electrodes are placed on the scalp and the computer’s microprocessor delineates slow and fast wave frequency to better teach subjects to inhibit distraction and enhance attention.

“Thirty years ago, most doctors thought I was nuts to think that the brain could deliberately change itself,” Kassel said. “Not only is that a common understanding of neuroscience, but it is in the knowledge base of the general public. … In fact, the American Association of Pediatrics came out two years ago, saying that neurofeedback was a level one evidence based treatment for A.D.D.”

Over the years, Kassel has worked to teach persons with Attention Deficit Disorder to strengthen their awareness, improve attention span and enhance their performance by using neurofeedback.

By the late 1980s, Kassel decided to broaden his biofeedback accomplishments by organizing a program for behaviorally and emotionally challenged students at Saugus High School in Santa Clarita. This program has also been used for elementary and middle school students, including Sierra Vista Junior High School in Canyon Country. The program was aimed at helping students overcome the stresses and anxieties that can frequently get in the way of academic performance. During this period of Kassel’s career, he collaborated with Dr. Gary Schummer on a research project that studied concentration and memory in the elderly population, using neurofeedback versus a video game control group.

Furthermore, Kassel has created an SAT preparation program called “Slay the SAT Dragon” from the mid-1990s to the year 2000. In addition to math and verbal skills review, the program exercised relaxation training and imagery to combat anxiety that prevents the brain’s ability to access information and perform optimally. Most of the students revealed in a post class survey that relaxation helped them raise their SAT scores. This technique has also been recently duplicated at Albert Einstien Academy in Santa Clarita with great success and was published last year.

In recent years, the veteran therapist has also pioneered a treatment program that combines biofeedback in couples counseling. The program uses a sophisticated computer screen which displays heart rate variability, hand temperature, sweat glands, respiration and uses two cameras, one for each spouse. This technique also teaches couples to stop the physiological reactivity that destroys relationships. He has published two papers on this Interpersonal-Biofeedback.

“After all, isn’t it our physiological reactivity which makes us feel uncomfortable or disgusted and defensive when we are constantly being blamed and criticized by our partners and defend?” Kassel said. “Learning how to control our heart rate and other aspects of physiology, as well as developing healthy communication hygiene, is what can save a marriage.”

Most insurance companies have removed coverage of biofeedback from their formularies since Kassel began in 1985. In many cases, if an insurance company decides to pay for such services, it is often at a rate that is lower than the cost to provide assistance, and these changes have caused Kassel to adjust his practice. Additionally, psychotherapy reimbursement and rates have not been regulated for inflation. These modifications have motivated Kassel to become a Health Care Reform Activist for the Single Payer System.

Even after 30 years of continuous devotion to biofeedback, his love of guiding others to improve personal growth has yet to end.

“I have so much passion for biofeedback therapies because they have proven efficiency over the last 50 years, as written in science literature and shown in clinical practice,” Kassel said. “I could do this for another 50 years.”

Set up an appointment with Dr Kassel here