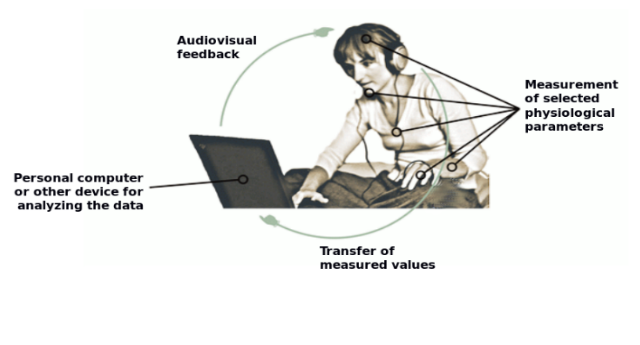 Why, you might ask, would a client in addiction treatment be willing to sit with electrodes pasted to their head for 30-45 minutes twice a week while a computer beeps and buzzes in the background?

One of the benefits of Neurofeedback for recovering alcoholics and addicts is that it produces the similar effect of their drug of choice (to a lesser degree), without side effects and negative consequences.

Electroencephalography (EEG) is an electrophysiological monitoring method to record electrical activity of the brain. Think: white plastic sensors attached to your head that have wires that are connected to a main computer. Due to the brain’s ability to change and adapt new patterns (called neuroplasticity) the brain is able to create new neural pathways that, with time, become sustainable. In active addiction, the pathways that are created reinforce drug use. In recovery, we are trying to “rewire” these pathways.

Neurofeedback treatments for addiction uses EEG biofeedback as a non-invasive means of training the brain to self-regulate. EEG sensors are attached to the scalp reading brainwave activity. The “feedback” is that the computer gives rewards to the brain when it produces specific brainwave activity. How does it work exactly?

Neurofeedback And The Addict’s Brain: How Does It Work?

What is really like to use Neurofeedback as an addiction therapy tool? Generally speaking, a person with addiction struggles with being over-aroused or under-aroused (and often fluctuates between both states).

1. If the person is over-aroused, they are in a state of:

Alcohol, benzodiazapines and opiates will calm this state (albeit with often deadly consequences).

Alternatively, Neurofeedback can be used to reward the brain and nervous system for calming itself. The brain receives feedback and a reward is given (such as seeing a spaceship fly on the screen or hearing the sound of ocean waves). The brain then continues to seek the reward thereby training itself to calm and self-regulate. The result is the patient feels much calmer somewhat like what they have gotten from substances in the past.

2. On the flip side, if the brain is under-aroused the person often struggles with:

Drugs such as cocaine, meth amphetamine, and other stimulants will make the person feel awake and alive (again with dire consequences). Programming Neurofeedback for a person experiencing these states helps encourage the brain to produce higher frequency brain waves that help:

NOTE HERE: Individualized protocols on the Neurofeedback machine are determined for each client based on their symptoms. But ultimately the brain is a self-organizing system that simply needs a bit of prompting to find its own balance. So, while there is a great deal of science involved in the process, there is also an organic phenomenon that occurs where the brain is seeking a regulated state. Our bodies have a profound innate intelligence when given the right conditions.

With ongoing training, the calmness produced during Neurofeedback sessions allows for long term sobriety because the need for immediate relief is no longer there. Ongoing training also helps to prevent relapse: learning to live from a more calm and rational state prevents impulsivity and reactivity in stressful situations.

As one recovering addict described it:
“It’s like having the buffer of time built in. I now have the time and space to observe what is going on within myself and have a conscious response rather than reacting or overreacting. I can also now access other tools to calm myself further before reacting. With Neurofeedback I’ve learned to use long, deep breathing to take me quickly into that state of balance.”

Ongoing Neurofeedback training not only helps with symptoms of addiction, it also helps the whole person function more effectively. The nervous system controls everything we do, both involuntary and voluntary (breathing, digesting, walking, talking, thinking, and feeling) So, it only makes sense that if the nervous system is in a more balanced state, it will affect the rest of system in a more harmonious way.

The treatment modality also helps the endocrine system to regulate hormones which attributes to a more balanced emotional state.

Frank Duffy, the Director of the Clinical Neurophysiology and Developmental Neurophysiology Laboratories of Boston Children’s Hospital says:
“The literature, which lacks any negative study, suggests that Neurofeedback plays a major therapeutic role in many different areas. In my opinion, if any medication had demonstrated such a wide spectrum of efficacy it would be universally accepted and widely used.”

We are whole, systemic beings. The brain and nervous system are central to all functions. Neurofeedback, with decades of research, has proven to be a solid approach to regulating the body’s many systems. Its application to the treatment of addiction has many possibilities for positive outcomes. Why not give it a try and commit to a series of treatments now?

Still, do you have any questions left unanswered? We are happy to help. Simply post your questions in the comments section at the bottom of the page and we’ll try to answer personally and promptly. In case we don’t know the answer to your inquiries, we will refer you to professionals who can help.

4 thoughts on “Neurofeedback Treatment for Addiction: Teaching the brain to self-regulate”