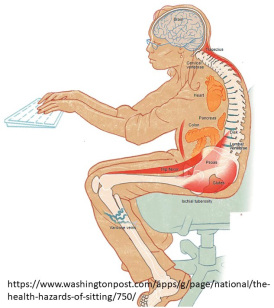 From the Peper Perspective :

Sedentary behavior is the new norm as most jobs do not require active movement. Sitting in a car instead of walking, standing on the escalator instead of walking up the stairs, using an electric mixer instead of whipping the eggs by hand, sending a text instead of getting up and talking to a co-worker in the next cubicle, buying online instead of walking to the brick and mortar store, watching TV shows, streaming movies, or playing computer games instead of socializing with actual friends, are all examples how the technological revolution has transformed our lives. The result is sitting disease which we belief can mitigate by daily exercise.

The research data is very clear– exercise does not totally reverse the health risks of sitting. In the NIH-AARP Diet and Health Study, researchers Matthews and colleagues (Matthews et al, 2012) completed an 8.5 year follow up on 240,819 adults (aged 50–71 year) who at the beginning baseline surveys did not report any cancer, cardiovascular disease, or respiratory disease.

The 8.5 year outcome data showed that the time spent in sedentary behaviors such as sitting and watching TV was positively correlated with an increased illness and death rates as shown in Figure 1. More disturbing, moderate vigorous exercises does not totally reverse the health risks of sitting and watching television (Matthews et al, 2012).

Figure 1. The more you sit the higher the risk of mortality even if you if you attempt to mitigate the effect with moderate vigorous exercise (Matthews et al, 2012). From: https://www.washingtonpost.com/apps/g/page/national/the-health-hazards-of-sitting/750/

The harmful impact of sedentary behavior and simple ways to improve health have been superbly described and illustrated by Bonnie Berkowitz and Patterson Clark (2014), in their January 20, 2014, Washington Post article, The health hazards of sitting, Their one page poster should be posted on the office walls and given to all clients. http://www.washingtonpost.com/wp-srv/special/health/sitting/Sitting.pdf

As they point out, sitting disease increases the risk of heart disease, diabetes, colon cancer, muscle degeneration especially weaker abdominal muscles and gluteus muscles, back pain and reduced hip flexibility, poor circulation in the legs which may cause edema in the ankles and deep vein thrombosis, osteoporosis, strained neck, shoulder and back pain. The effects are not only physical. Sitting reduces subjective energy level and attention as our brain becomes more and more sleepy.

The solution is both very simple and challenging. To reduce the risks, do less sedentary behavior and sitting and do more physical movement during the day. Continuously interrupt sitting with standing and movement. After sitting at the computer for 30 minutes, get up and move. Even skipping in place for 30 seconds, significantly will increase your energy and mood (Peper and Lin, 2012). There are many ways to remind and support yourself and others to move. For example, use reminder programs on the computer such as StretchBreakTM to remind you to get up and stretch. Employees who do episode movements, report fewer symptoms and have more energy (Peper & Harvey, 2008). As one of the employees state after implementing the break program, “There is life after five.” Meaning he was no longer exhausted when he finished work.

Although challenging, wean yourself away from the addicting digital screen and being a couch potato at home. At those moments when you feel drained and all you want to do is veg out by watching another TV series, go for a walk. After walking for 20 minutes, in most cases your energy will have returned and your low mood has been transformed to see new positive option. Plan the walks with neighbors and friends who provide the motivation to pull you out of your funk and go out.