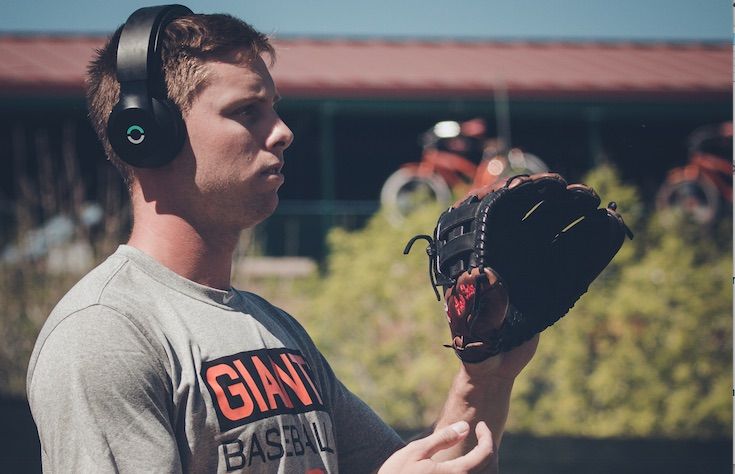 The San Francisco Giants may be wearing headphones while they train, but they’re not listening to music. They are getting their brains “stimulated” to improve their batting, pitching, and catching.

The headphones are a new tool used by the Giants in hopes of enhancing player performance across the board. The team’s deal with the device’s maker, Halo Neuroscicnce, is the first public pact with a Major Baseball League team and a sign of how sci-fi technology is making inroads into pro sports.

The Giant’s use of the headphones, announced by Halo on Wednesday, comes just days before the start of the baseball season. The technology makes up an important part of the team’s training process, the startup said, along with the usual stretching, running, and weight lifting.

The theory is that low-level electric pulses, known as transcranial direct current stimulation, from the headphones stimulate a part of the brain known as the motor cortex, Halo Neuroscience CEO Daniel Chao told Fortune last year, long before the deal with the Giants was announced. That stimulation combined with physical training, can boost an athlete’s strength, “explosiveness,” and skill, he said at that time.

The goal is to help athletes hone their “muscle memory” so they react more quickly, seemingly without thought, to a pitched or batted ball, or a runner leaving base. The sensation any individual feels can vary from a slight tingling or buzzing. Some people don’t feel anything. There is a dial on the headphones to raise or lower the stimulation level.

The Giants actually started testing the Halo Sport headgear at last year’s spring training with half the team using the gear, half not. Afterwards, they crunched numbers and found that the half that used headgear showed significant performance improvement over the control group across nine standard performance metrics, according to a Halo spokeswoman.

Most important, they showed significant improvement in speed, across the board as measured by how fast the player moved the bat or ran the bases as well as in fine motor skills: which encompass how they grip the bat or ball. Fortune reached out to the Giants for comment and will update this story as needed.

When a player is at bat, his muscle memory (which is stored in the brain’s motor cortex) has better recall of every past swing in the batting cage. For a pitcher, the form they’ve perfected in training is replicated more precisely on the mound.

There has been peer-reviewed research on transcranial direct current stimulation, and Halo has submitted its own research which has yet to be published.

Other Halo clients include the Golden State Warriors, whose players started using the headphones last year, according to The New Yorker. For the record, that team came very close to winning its second consecutive 2015 NBA championship last year before falling to the Cleveland Cavaliers in seven games (who apparently don’t use Halo headphones). Several Olympic athletes have also used Halo, as Fortune reported last year.

A Halo spokeswoman said the company is also working with other organizations in the NHL, MLB, and NBA, but only the two San Francisco area teams are public about their use. Perhaps it helps that Halo, which has just over $10.6 million in funding from venture capital firm Andreessen Horowitz and others, is also based in San Francisco.

Other companies selling consumer wearable devices that use energy to stimulate the brain include Thync and Fisher Wallace Laboratories. Some people use such devices to treat depression or insomnia.

This article was originally published on FORTUNE.com