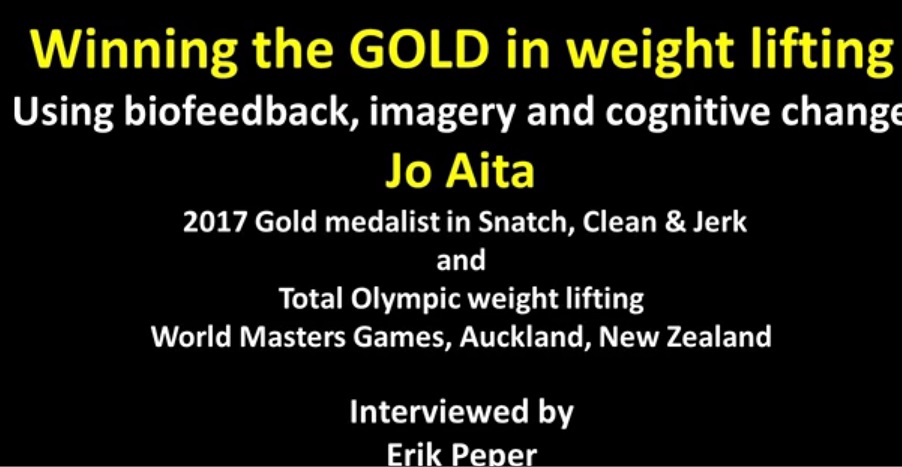 Setting a personal best and winning the Gold medal is a remarkable feat. Jo Aita, age 46 and weighing 58 kg, set the Masters World Records and Masters Games Records in Snatch, Clean & Jerk and Total Olympic weight lifting at the World Masters Games in Auckland, New Zealand, April 26th, 2017. She lifted 71 kg in the Snatch and 86 kg in the Clean and Jerk Olympic lifts in the 45-49-year-old age group (see video in figure 1). What makes this more remarkable is that her combined lifts were 3 kilograms more than her life-time best in previous competition. She refuted the conventional wisdom that weight lifters peak in their mid to late twenties. There is hope for improvement as aging may not mean we have to decline.

There are many factors–and many more which we do not know–which contribute to this achievement such as genetics, diligent training and superb coaching at the Max’ Gym in Oakland as a member of Team Juggernauts. In the last three years, Jo Aita also incorporated biofeedback and visualization training to help optimize her performance. This report summarizes how breathing and electromyography feedback combined with imagery may have contributed to achieving her personal best[3]. As Jo Aita stated, “I recommend this to everyone and hope that you can work with athletes in my gym.”

Components of the 30 sessions of biofeedback, internal language and visualization training program

The training was started in September 2014 to reduce anxiety and improve performance. The components embedded in the training are listed sequentially; however, training did not occur sequentially. They were dynamically interwoven throughout the many sessions and augmented with homework practices, as well as storytelling of other people achieving success using similar approaches. The major components included:

1. Mastering effortless slow diaphragmatic breathing in which the abdomen expanded during inhalations and constricted during exhalation. The respiration feedback and training was recorded with BioGraph Infinity respiration sensors and recorded from the abdomen and upper chest. Her homework included monitoring situations where she held her breath and then anticipate breath holding by continuing to breathe. She also practiced slower breathing with heart rate variability feedback from a Stress Eraser. Practicing these allowed her to become centered and regenerate more quickly. As she stated, “It helped me during the day when I am anxious to calm down.” Throughout the training, the focus was to use breathing to rapidly regenerate after exertion especially after training.

2. Learning to relax her shoulder muscles with electromyography (EMG) feedback to regenerate and learn awareness of minimal trapezius muscle tension. She could use this awareness to identify her emotional reactivity (Peper, Booiman, Lin, & Shaffer, 2014). Often emotional reactivity increases muscle tension. She learned to relax here muscles quickly after muscle contractions to allow regeneration

See the full article and videos on “The Peper Perspective“